As one of the pioneers in private cosmetic surgery in Quebec, Dr. Pierre Courchesne has brought innovative techniques to the field of cosmetic medicine. Leading the team at Le Centre de Medecine & Chirurgie Esthetique (CMCE), Dr. Courchesne is known for his ability to deliver exceptional results alongside exceptional client care. Interested in learning how the CMCE team can help you achieve your aesthetic goals?  Submit a contact form today! 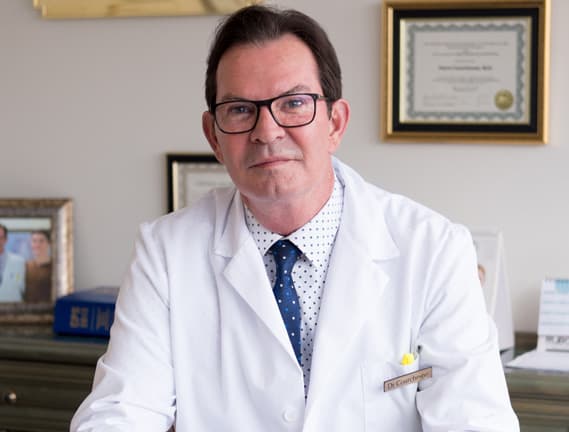 Dr. Pierre Courchesne was born in La Visitation, a small farming region in the center of Quebec. He was the 10th child of 14. Pierre’s father was a farmer and all the children helped with the work while they were learning a trade. Most of the children went into construction, farming and teaching. Pierre knew from a very young age that he wished to do advanced studies; he was very curious and full of energy. Unfortunately, as it was the case in most small farming regions, university studies were very expensive and if you did not live in the large metropolitan areas your chances of getting higher education were quite slim. Of course, that did not stop Pierre from finding ways of getting himself through school- from waiting tables, to painting, construction, and other odd jobs.

Times were difficult and he could not really count with the help of his parents since there was not enough to go around. His older brothers decided to try their chances in the United States where a relative had a small construction company. Pierre liked construction but he knew it would not be enough for him. He managed to get through the first years very tightly financially, but the last year was tough. He did not have the time to work so he went straight to the director of a local bank and asked if he could get a loan to finish his studies. Pierre was so convincing and passionate about his purpose that the director was able to get him a loan with the condition of showing him his grades and achievements every month. It was a chance he will never forget since something like that will never happen these days. A complete stranger would never have access to the director of a bank.

Dr. Pierre Courchesne successfully finished his studies at the University of Laval in Quebec City. He was so happy and proud (and in debt). Luckily, there were many opportunities as the demand for doctors at the time was high. Pierre began internships back in his hometown of Nicolet for three years before going to the then new Gatineau hospital where he worked for 8 months. He then practiced at Pierre Boucher Hospital where he was in charge of the internships and the emergency room for new doctors coming from the University of Montreal and University of Sherbrook. He was also chosen to be part of the medical team when the pope Jean-Paul II visited Canada. During all these years he kept assisting local and international conferences on a variety of medical issues concerning the latest technologies and procedures in medicine. He was also the medical director for the pilot project of Helicopter ambulance Max-Vie until 1990. Many times during this period he looked after the medical services for V.I.P. visitors to Canada. Among the visitors were Prince Charles, The president of Israel and the honorable Canadian governor Jean Sauvé as well as Queen Elizabeth II.

At the beginning of the 90’s, Dr. Pierre Courchesne worked in the United States where he had the chance to work at the renowned Cleveland Clinic. Returning to Montreal in 1992, he opened his own practice for general medicine and associated himself with Dr. Prescott at the surgery clinic Centre Ville. Dr. Prescott was one of the top cosmetic surgeons in Montreal. At the same time, Pierre received a fellowship from the American College of International Physicians and received his diploma for Phlebology, where his passion and talent for injectables began. Pierre learned from the best for liposuction and hair transplants, as well as all the cosmetic procedures known at the time. He developed a particular talent for stitching and he is proud of the invisible scars that remain when he needs to remove cysts, lipomas or other growths in the skin. Not only was Pierre developing and perfecting new skills, he was also traveling extensively to assist with conferences on aesthetics, where he received hands on experience from the best surgeons in the United States, Brazil and Europe. After getting all his specializations, Pierre finally decided to open his own private cosmetic surgery clinic with an operating room, Le Centre de Médecine et Chirurgie Esthétiqu. Now, with two locations in Longueuil and Granby, Pierre and his team have helped over 40,000 patients achieve their aesthetic goals with innovative techniques.

The adventure of a life time continues.

Find out what patients have to say about their experiences with Dr. Pierre Courchesne:

Allow me to comment on the vitamin treatment I am currently receiving. As you know, I have a very sensitive skin type and that is why for several years I have received different treatments in different clinics. I have the pleasure to inform you that since the beginning of the vitamin treatments you give me, my skin has never been so beautiful. I also apply the products you have recommended to me. My skin has a lot more shine, looks smoother and has a lot more tone ... I can not wait to see after the complete series of treatments what this is going to give .... Thank you for the excellent quality of care you are giving me now. It's a pleasure to see you again.